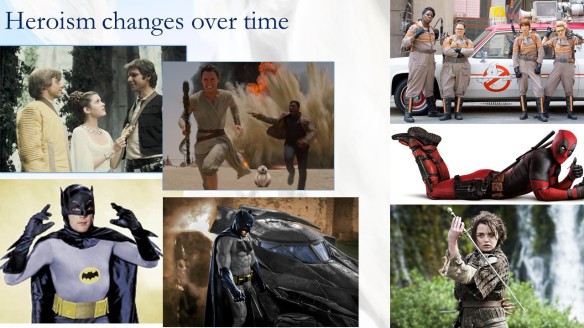 Our notions of heroism change over time. The construction and reception of heroes is dependent on context. Often the heroes of a time and place are only decided in hindsight when their actions and the consequences of those actions are weighed by the collective, the media or Hollywood scriptwriters.

Texts can reflect the values, anxieties and aspirations of their time and place. For example, the Star Wars franchise has changed its notions of the hero over time. Early Star Wars films had some diversity back in the 1970s. Leia was an independent hero who could stand up for herself and played a key part in the Rebel Alliance. But she was still pictured as the pretty woman handing medals to the male heroes. Lando Calrissian was a non-white heroic figure, but a more minor and less honourable character than the two white males, Luke and Han. Diversity and Otherness were also foregrounded by the multiple alien species in the films, from everyone’s favourite heroic Wookie, to sinister or repulsive villains.

Fast forward almost forty years and Rei and Finn, the heroes of the 2015 Star Wars Episode VII (which I have written about here and here), show the shift in the hero’s representation in terms of gender and race.

Meanwhile, Batman is a hero whose representation has evolved over time, from the silly unintimidating comical figure of the 1960s television show, to the tortured, vengeful, imposing figures of recent films. Newer Batmans, including those played by Christian Bale and Ben Affleck, are psychologically darker and more complex.

In 2016, heroes like Deadpool and the new Ghostbusters question the traditional portrayal of the hero. Deadpool, like the animated hero Shrek, challenges stereotypical hero behaviour. He is rude, lewd and without a noble cause. The new Ghostbusters expand our vision of how heroes might look. The Game of Thrones franchise, too, agitates reader and viewer expectations of the hero by presenting us with complex, shifting characters who dance along and frequently cross the line between heroism and villainy.

How is the realm of leadership affected by the fluid definitions of heroism, dependent as they are on the time and place in which any real, mythological or fictional hero is created and received?

Today I’ll be speaking at the Rise and Future of Heroism Science Conference in order to explore what insights the data from my PhD has to offer the field of heroism, and what heroism has to offer the arena of leadership.

The questions I ask are:

My answer, based in the emergent themes from the interview data of school leaders in my PhD study, is that the traditional lone hero on an individualistic quest is not an appropriate metaphor for the school leader. The leaders in my study reflected notions of servant, distributed, caregiver or transparent leadership.

Participants offered up their own metaphors for heroic leadership, revealing that heroism when leading others can be fluid, deliberate and imperceptible.

In my PhD thesis, I applied the literary character of the Cheshire Cat to emblematically articulate the visible-invisible school leader, who deliberately appears and disappears, showing only part of themselves depending on the needs of those who they lead. The Cheshire Cat leader empowers others to find their way through their professional Wonderlands. Sometimes they are the encouraging grin, the glimmering eyes, the disappearing tail. At times they are the disembodied voice, mentoring, coaching or guiding. Unlike the autocratic and unlikeable Red Queen, the Cat is a mysterious guide who operates from the aerial view of the tree, with an understanding of the bigger picture.

The image of leaders posturing as white knights of school improvement, wielding swords of change and self-promotion, is seductive but unhelpful. Heroism in school leadership can be deliberate, fluid and at times imperceptible. School leaders can focus on the collective good and intentionally navigate visibility and invisibility (although I wonder to what extent deliberately imperceptible leadership can feel like being an under-appreciated Santa Claus, and how leaders feel when their machinations to build the capacities of others go unnoticed).

My PhD suggests that leadership that serves a community or organisation, and the individuals within it, need not be highly visible. Heroism in leadership can be about deliberate invisibility, the barely discernible swish of a tail and the disappearing gleam of a Cheshire grin.