Title slide for our AARE 2018 symposium

I have been thinking about a question from the audience during the AARE symposium I chaired and presented in yesterday. The symposium abstract (below) outlined the notion of flipping the education system as a thread connecting the five papers presented.

The education system, in Australia and around the world, has governments and policymakers at its apex, making decisions disconnected from those at the nadir: teachers and students. Schools in this system are highly bureaucratic institutional settings, and teachers are increasingly undervalued, constrained and de-professionalised. The individuals and groups that wield influence on education policy and practice operate bureaucratically are physically removed from schools. They construct narrow measures of the success of schooling, and these impact on teacher agency. This education policy environment was evident in the recent Gonski 2.0 report with its focus on PISA, NAPLAN, and rhetoric of ‘cruising schools’ failing generations of Australians. A focus on numbers and rankings contribute to the disconnect between bureaucracy and the profession, and to the tension between education’s vision for equity and the realities of competition, marketisation and a culture of performativity.

This symposium shares perspectives around the notion of ‘flipping’ the education system in ways that embrace human aspects of education, wrestle with the criticality of the task of schooling at the margins, and engage with multiple voices in education, especially those often side-lined in education discourse and education policy. This collection of diverse papers together makes a compelling case for change in education policy and practice by tackling: elevating the professional identities and voices of teachers and school leaders; teachers’ perceptions of commercialisation in Australian schools; discourses that silence Indigenous voices in education; authentic engagement between teachers and Indigenous families and communities; and empowering educators to reclaim narratives of schooling.

During the symposium’s question time, an audience member suggested that if we were going to really ‘flip the system’ in education that there would need to be some sort of (Foucauldian) rupture, a traumatic breaking apart of the system in order to rebuild it. He told us that as presenters we were (too) measured and polite in our arguments, something he didn’t see as necessarily able to flip a system. Where was the rupturing, the eruption, the kapow of revolution?

I have wondered before about activism and the forms it takes. Who can be an activist? Is it only those with secure, late-career jobs? Can the early career teacher or researcher really challenge the system in which they work when that can put them at risk of unemployment or further precarity and uncertainty? Does an activist have to look, act and speak a certain way? Can an activist use the apparatuses of power in order to undermine that power, or does she need different tools? 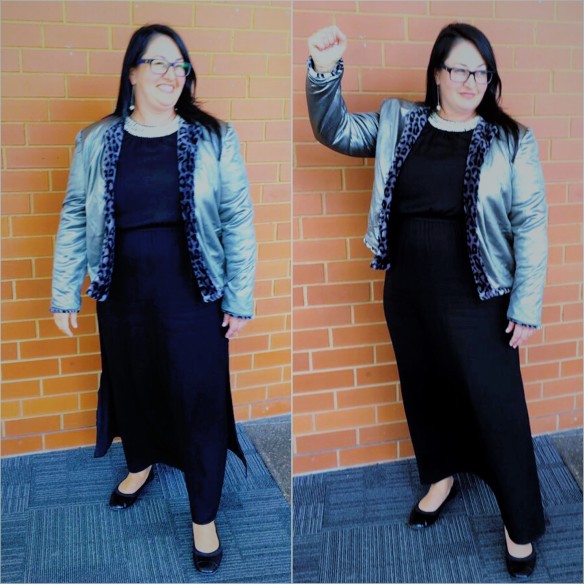 I also wonder what power looks like. This week at the AARE conference, I took part in the Feminist Educators Against Sexism (FEAS) power dressing project, which you can read more about here. Above are two photos a colleague took of me while I was wearing the FEAS symbolic power dressing blazer. In the first, I am laughing as I prepare for the photo, and in the second I am attempting a ‘power pose’. I like the first photo better. I love the symbolism and the gallery of images of the FEAS power dressing project, which show the range of ways women can appear powerful. What I am questioning here is my own discomfort with performing power in a way that might not be authentic. I wish I had worn my favourite red lipstick and laughed at the camera (although I did manage a sardonic raised eyebrow). Power doesn’t have to be a Rosie the Riveter bicep curl or a ferocious snarl. It doesn’t have to be loud, enraged or serious. It can be quiet, comfortable or joyful. Powerful women can and do smile, and enjoy the way they dress and the way they look, as well as their contributions to work and life.

In the Flip the (education) System movement—explored in a variety of ways in yesterday’s symposium and in our new book Flip the System Australia: What Matters in Education—we believe that teaching, leading, researching and writing are political acts. In education, we are all activists. But activism does not have to be violent or deafening. Many of the arguments in the book and in yesterday’s symposium are measured and polite, as our audience member pointed out. Our intention is that a greater range of voices be invited to and heard at the decision making tables of bureaucracy and policymaking in education. In order to be invited in, we need to engage with system level decision makers in considered and convincing ways. We can do that with words and research, not just with placards and protests.

Our book chapters provide examples of resistance that is logical and beautifully articulated. In their chapter, Greg Thompson, David Rutkowski and Sam Sellar argue that international large scale assessments like PISA should not be dismissed. They have a place in the education landscape, but that teachers can be part of engaging with them in order to inform education systems. “Who,” the authors ask, “has better vantage point from which to shape the public debate about quality education than the educators who are constantly striving to deliver it in our schools?” (p. 62).

In her chapter, Rebecca Cody invites school leaders to abandon binary thinking that leads to schools embracing either performative accountabilities, or principles of holistic education. She argues that school leaders can and should ride both these ‘wild horses’ simultaneously.

Melitta Hogarth calls for Aboriginal and Torres Strait Islander peoples to “be more vocal and ‘stand on toes’”, to “unite in our concerns for our children’s futures, demanding a position at the table” (p. 113), but acknowledges the difficulties and complexities inherent in such a call.

These chapters reflect the point made by Nicole Mockler and Susan Groundwater-Smith in their new book, Questioning the language of improvement and reform in education: Reclaiming language, in which they suggest that it might not be fruitful to argue against concepts such as quality, standards and improvement, but that we can resist and reclaim the way these are used in education. We can focus on growth, collaboration, and professionalism, for instance, rather than using accountabilities as a stick with which to beat teachers and schools.

So, I have reflected on our audience member’s question about the need for a rupture in the system, in order to flip it, liquefy it, and democratise it. We speakers and writers are hyper aware that we are using the structures and language of the powerful in order to speak into this space. Book chapters written in fairly formal English and referencing academic texts could be seen to perpetuate the very system we are attempting to challenge. But we can work to change the system from the inside out.

Foucault, who was mentioned by our questioner, noted that there are occasional radical ruptures, but that more often there are smaller forces or moments of resistance. Those of us within the system can agitate in ways that are dramatic and fierce, but also be in ways that are eloquent and subtle. Revolution and power can come in the form of micro rebellions and the snowballing of a collective voice that is revolutionary in its strength in numbers, in its logic, and in its unwavering persistence to nudge the system towards positive change.

3 thoughts on “What do activism and power look like?”