Over the last few days I have been watching the Future Schools conference hashtag and wondering about education’s obsession with the imagined future and with constantly attempting to rebadge education to address it. Despite STEM and coding being clear national foci for Australia, yesterday Rob Stokes, NSW Education Minister, put a spanner in the works when he claimed that STEM has become a buzzword and a fad, arguing for a holistic multi-disciplinary approach to education where humanities, arts, philosophy and literature are valued equally to science, technology, engineering, and mathematics. There is plenty of money to be made by consultants and corporations, however, when ‘the future’ is marketised and everyone with five minutes in education is encouraged to be a -preneur who disrupts the status quo, reimagines education, and looks with disdain at traditional teaching methods or a focus on knowledge.

The notion of being on the cutting edge and hurtling towards ‘the future’ dovetails with my recent reading and thinking around the current review of our school library. We are reconsidering our library’s purpose, functions, roles, and resources. I am in the process of drafting a review of scholarly literature and current practice around libraries, which are very much caught up in fighting for relevancy through a simultaneous championing of the past and predicting the needs of the future.

‘Library’ is an idea that has been around since the ancient world. Cassidy (2017) points out that the Great Library of Alexandria, built around 300BC, wasn’t great just for its collection of books, but its “intellectual raison d’être: the insatiable pursuit, creation, and dissemination of knowledge as a force to drive civilisation” (p.3). He argues that the Great Library wasn’t about books or architecture, but about knowledge and access to information. The classical library served as an exemplar of the national public and a symbol of imagined community (Delica & Elbeshausen, 2017).

The library throughout time has had in many ways a constancy in its role and function, a commitment to sustaining and creating culture despite, and perhaps because of, social and global change (Wilkin, 2015). Lankes (2011, 2016) points out that the tools of the library change but that those things that remain constant are the why of libraries. They remain a core democratic institution that provides access to and preserves our scientific and cultural heritage (Palfrey, 2015). Over time, libraries have become increasingly localised and community-oriented (Delica & Elbeshausen, 2017).

My review of literature found that libraries are:

The three key areas that have emerged from the literature, for consideration around our school library, are library as community centre, learning support, and digital hub, with those aspects outlined as follows. 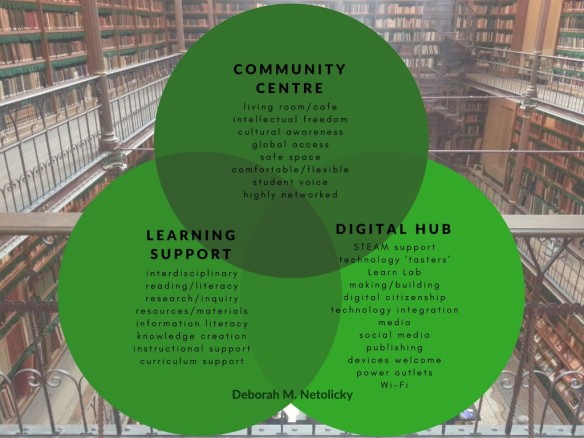 While studies reveal that reading books is important for thinking and success (e.g. Djkic, Oatley, & Moldoveanu, 2013, who suggest that reading fictional literature leads to better procedures of processing information generally, including those of creativity), the pressure is on for libraries to cull print resources in favour of electronic and technological ones. People are accessing resources anywhere, anytime, via apps, the cloud, and online repositories. Gesture sensing technology, voice recognition, artificial intelligence, machine learning, and self-publishing are changing the face of information and of libraries. The digitisation of content means that researchers can often access resources without entering the library, a change that I laughed about with my grandfather who did his PhD with paper copies of journals and a typewriter (and my grandmother, who did much of the typing).

School libraries have been called instructional media centres, media centres, information centres, information commons, iCentres, learning labs, learning commons, digital libraries, and cybraries (Farmer, 2017). These terms are in some ways faddish and transitory. ‘Library’, however, has a deep and long tradition associated with it, although the spaces and tools of libraries change over time. Librarians in schools have also had many names, such as teacher librarian, library teacher, library media specialist, library media teacher, cybrarian, information navigator, information specialist, information professional, informationist, and information scientist (Farmer, 2017; Lankes, 2011). Lankes (2011) argues that the terms ‘library’ and ‘librarian’ are entwined with the concept of knowledge and learning. I have said before that those claiming disruption should embrace interrogation of their ideas. Does ‘library’ need to be disrupted, in what ways, and why (or why not)?

Libraries around the world are reinventing themselves. Somerset Libraries call themselves a dynamic, evolving and integral part of the community that open up a world of opportunities for reading, understanding and discovery. Albert Kivits, Head of the Eindhoven public library in the Netherlands outlines the concept of the public library moving towards a House of Data, Information and Wisdom. Pilar Martinez, CEO of the Edmonton Public Library in Canada, calls modern libraries ‘porous’, referring to their multi-way information and the way that the community reaches into them, and they reach out into the community.

As well as print books, e-books, audio books, music, periodicals, and DVDs, many public libraries offer interactive areas, classes, courses, study groups, makerspaces, and technology such as 3D printers, Raspberry Pis, Micro:bits, and the capacity for photography, video-making, podcasting, and coding. Libraries provide ‘lab’ spaces for co-production, exploration, and making new knowledge (Palfrey, 2015). Chicago Public Libraries has the YOUmedia Centre in which teens engage in projects across a variety of core content areas including graphic design, photography, video, music, 2D/3D design, STEM and hands-on making. San Francisco Public Library has The Mix teen centre, which houses a collection of young adult books, a mini-amphitheatre, a state-of-the-art recording studio, a video production space, a bank of high-end computers to aid in the editing process, and a makerspace with leading fabrication technologies. The New Taipei City Library in Taiwan is a ten-story high rise in which each floor features a specialised function with separate zones dedicated to media, video viewing booths, and entertainment spaces. The University of Adelaide Libraries’ ‘Library of the Future’ report (Gregory et al., 2015) is well worth reading. These libraries are inclusive, vibrant, and high-tech, and focused on equity, capabilities like critical thinking, and the needs of the individuals within their communities.

Last year I wrote about my then-thinking about libraries. Even though current libraries look, feel, and sound different, I wonder if I am being old-fashioned and English-teachery by wanting our library to be called Library. Should I be persuaded to call it an Information Science Hub of Preneurism, or an Apptastic iLearning Maker-Thinker-Coder Space, or a House of Knowledge, Innovation, and Disruption? Is it outdated to cling to the concept of ‘library’ as a place of knowledge, access, thinking, equity, and ideas?

Palfrey (2015) challenges us that “dynamism must be the watchword for libraries in the digital age” (p.41). ‘Library’, I think can remain relevant to the user of the future, by keeping its core mission close, and thinking creatively about the tools, spaces, and resources to bring this to life for its community in a changing world.

*Disclaimer: Actual books were read in the preparation of this blog post.

Cassidy, K. (2017). This is what a librarian looks like: A celebration of libraries, communities, and access to information. New York: Black Dog & Leventhal Publishers.

Gregory, M. et al. (2015). Recommendations for a bold and agile University library: Library of the Future. University of Adelaide.

Palfrey, J. (2015). BiblioTECH: Why libraries matter more than ever in the age of Google. New York: Basic Books.

I am an Australian educator and PhD with 20 years of experience in teaching and school leadership in Australia and England. I am the author of 'Transformational Professional Learning: Making a Difference in Schools' and co-Editor of 'Flip the System Australia: What Matters in Education'. My 'the édu flâneuse' blog narrates my thinking around education, coaching, professional learning, writing, research, travel, and identity. Photographs are usually mine.