I spent the last day of 2015 in motion, quad biking along a beach.

Last year, in the new year, I focused my attention on three words: presence, sharing and strength. I was focused on being present in each life aspect and relationship, sharing and storytelling, and building my strength in body, knowledge, connection and conviction. My 2015 ended up being focused around lots of writing, and on the one word we had written on our chalkboard at home: CONQUER. I was focused mainly on conquering my PhD thesis (and I got it submitted), but also conquering some academic papers and conferences, conquering fitness and strength goals. Seeing a daily reminder of that one word gave me a laser-like focus on finishing, completing, conquering. I pushed hard, remained motivated and hit milestones. But it also left me exhausted!

This year I was looking for a “one word” (sometimes called one little word or one word 365) which was more yin and less yang, more reflective and less explosive, more about regeneration than domination. While I was still attracted to active words like inspire, ignite and create, I considered gentler words like refine, renew and play. But none of these cover what I think my 2016 will be about. Maybe I’m not so ready for stillness or space or quiet just yet. I don’t want to be conquering in 2016, but one of my big lessons of 2015 was to put one foot in front of the other and just keep moving.

I spent my last day of 2015 quad biking with friends and family on a long pristine stretch of white beach. Snaking, quickening, turning, moving, the wind whipping around and against us. Speeding up. Slowing down. Driving away and towards and around. Playing with speed and direction, throttle and velocity, movement and pace. Feeling the terrain beneath the bike: sometimes flat, sometimes bumpy, sometimes hard, sometimes cushioned by peaks of white sand. Concentration. Adrenalin. Acceleration. The word I have come to for 2016 is MOMENTUM, from the Latin movere, meaning “to move”. This will be a year of being in motion or on the move.

my son, dressed as an angel, in motion

I’m not starting 2016 from a stagnant place. I am already moving. My PhD is being examined, and will hopefully be done, dusted and doctored some time in 2016. I have some academic papers in the pipeline. The coaching professional learning model at my school is implemented and in an iterative refinement phase, and I’m in conversations about what my role might look like in 2017 and beyond. So what I want to do in 2016 is keep the momentum going, capitalise on what I’ve achieved so far and push ahead. Move.

The idea of momentum in the sense of a rolling snowball isn’t quite right for me, as that kind of momentum is quite linear. I’m thinking of something more fluid. Kayaking through rushing river water. The momentum of paintbrush over canvas. Skis slicing through snow. Music building to crescendo. Feet running off a mountain to begin a paraglide. Quad biking on a beach. This kind of momentum requires a combination of knowledge, precision, creativity and mastery. It can be messy and lead to the unexpected.

I’m not sure about the end point of my momentum. People have asked me what I’ll do after the PhD and the answer is, I don’t know. I have some ideas of what might be similar or different from what I’m doing now, but I’m not set on one course. I’m happy where I am, doing what I’m doing. But I’m open to alternative directions and possibilities. I figure if I set my intention for 2016 on being in motion – forward, diagonally, in, out, reflectively, critically, creatively – my path with open up before me. Or I’ll find that I’m already travelling along it. 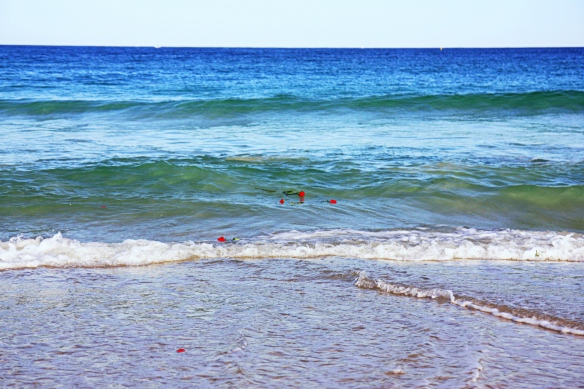 roses in the ocean, in motion carried by the waves

H O M E S C H O O L. Our messages to our children on Day 1 (today) were as follows. . . Set your own schedule. Make your own food. Clean up after yourself. Stay active. Be creative and independent in how you spend your time. Be helpful. Be respectful. Be kind. . . #homeschool #homeschooling #homeschoollife #schoolclosure #education
G R A T I T U D E. . It’s a time of worry, anxiety, fear, uncertainty and rapid change. Can we also sit with what we’re grateful for, what’s possible and what’s positive? . Today: fresh air, chats with family and friends, supportive colleagues, a job, a home, technologies that connect us. . #gratitude #uncertainty #uncertaintimes #thankful
R O C K S T A R. . Here I am in my Madonna headset about to run a live video meeting with my Year 12 Literature class. Today my school pivoted to distance learning and most students were learning from home while teachers taught from school. . It’s not just the headsets my colleagues are now wearing that make them rockstars. Teachers are doing an incredible job right now in relentlessly changing circumstances. And now that many kids are at home, so are parents! . Headsets off to all the rockstars teaching, parenting, learning, hand washing and physical distancing. We’re in this together. . #distancelearning #remotelearning #onlinelearning #covid19au #teaching #microsoftteams
Dear @peak_body, You are one of my happy places, part of my weekly routine, and a wonderful community of generous, joyful people who come together around health, fitness and coffee at @96express. Tonight’s announcement by the government might mean your doors are closed from midday tomorrow, but your tribe will be back at those doors when they re-open. #community #gym #fitness #coronavirusaustralia #covid_19 #socialdistancing
D I S T A N C E. . Isolation can lead to loneliness, anxiety and depression. We need to be creative in how we now find ways to connect and maintain social closeness at a time of physical distance. FaceTiming grandparents, Friday night drinks via Zoom, delivering groceries to friends and neighbours, texts and phone calls to check in and chat, sharing the minutiae of our day with each other (‘here’s my pet / lunch / view / workout / playlist). . How are you creating social intimacy at a physical distance? . #wereallinthistogether #socialdistancing #physicaldistancing #physicaldistancingsocialconnecting #mentalhealth #wellbeing #selfisolation #stayathome
I C I N G. Sometimes a little #actofkindness goes a long way. Take care out there. Be kind to yourselves and each other. Connect (from a distance). Stay well. #kindnessweek #kindnessmatters

I am an Australian educator and PhD with 20 years of experience in teaching and school leadership in Australia and England. I am the author of 'Transformational Professional Learning: Making a Difference in Schools' and co-Editor of 'Flip the System Australia: What Matters in Education'. My 'the édu flâneuse' blog narrates my thinking around education, coaching, professional learning, writing, research, travel, and identity. Photographs are usually mine.