There is a sacredness in tears. They are not the mark of weakness, but of power. They speak more eloquently than ten thousand tongues. They are messengers of overwhelming grief…and unspeakable love. ~ Washington Irving

In education we often talk about innovation. How do we innovate as educators? How do we help students to be creators of boxless thinking and imaginative action? How do we preserve our childlike delight in the world?

This weekend French artist, director and dreamer Jean-Luc Courcoult, and his group Royal de Luxe, brought their Giants to Australia for the first time, as part of the 2015 Perth International Arts Festival. These giant marionettes acted out a story over two and a half days through the city streets. They were innovation incarnate, creativity in action, dreams come to life.

The city was captivated, with 1.4 million people – half the population – converging in the city centre to be a part of this experiential phenomenon.

My experience of the Giants was one which allowed me to be intensely in the moment, fully and bone-tinglingly present (beautifully aligned with one of my 3 words for 2015: ‘presence’).

My pictures only capture one moment of many, and one marionette of two. You can read and see some coverage here, read the official Festival material and see the Giants’ adventures in other cities. I was grateful for the social media assault which allowed me to follow the journeys of both Giants throughout their time in Perth.

These images don’t do justice to being there amidst what was an awe-inspiring and magical spectacle. The sonar beeps, didgeridoo and haunting music playing from the band float. The gasps and emotional astonishment of the crowd. The beyond-amazed believing-in-magic faces of children and adults.

As I watched the 11m diver awaken from the footpath outside the train station, rise into the sky and then start walking in front of me, I was moved. There was something about the music, the scale, the movement, the crowds and community atmosphere which left me shaking and in tears, even as I held my son to my hip so that he could see.

That evening, when I asked my four year old what his favourite part of the day was, he turned to me with a look of absolute joy and wonderment and said in a loud whisper, “The giant looked at me!’

It is a rare and special thing to be unexpectedly and powerfully moved. To experience innovation, risk taking and a crazy idea taken to its limits. To be part of a meta narrative and a community tidal wave. I highly recommend it. 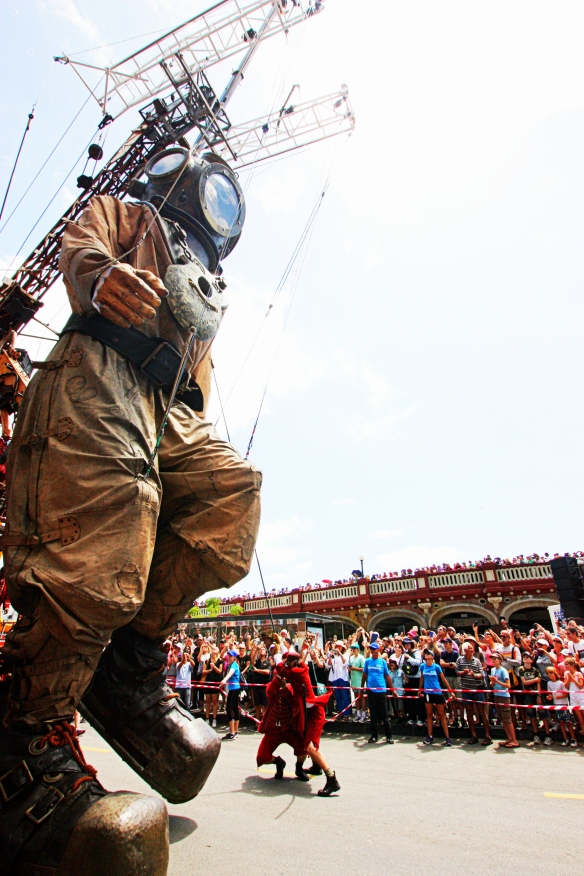 boots made for walking

Taste of democracy. Breakfast of champions. Let’s go, Australia.
Today I was recognised as one of Australia’s most influential educators by The Educator Australia.
I launched @theedusalon podcast in February with the hope that it would provide a space for connection and conversation around education. It’s certainly providing that for me! And I’m receiving wonderful feedback from listeners.
T I D E.
🤍👵🏼🤍
💙💚💛