The real problem is not whether machines think but whether men do. ~ B. F. Skinner 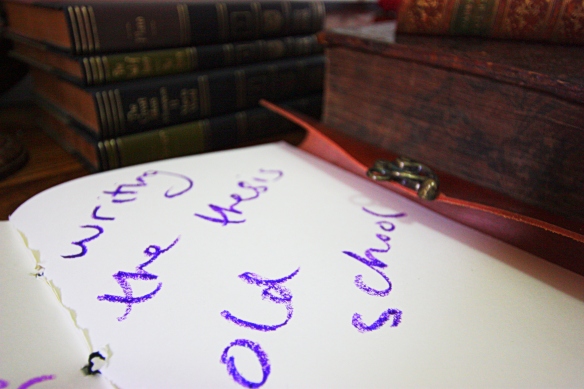 What counts as writing the thesis ‘old school’?

I have spoken before about my love of creative physical media as a way into thinking, and about some of my favourite retro tools (like *gasp* pencils!). My approach to writing my thesis would probably also be considered pretty old school. I haven’t been using a typewriter or writing into wet clay with a reed pen, but it’s been pretty straightforward and low tech. I recorded interviews on a dictaphone, not an iPad (although the usb attachment meant audio files were easily transferred to computer). I use Moleskine-esque Typo Shop buffalo journals to take notes during supervisor meetings. I manually record references into my word processed document (I know, I know, there are plenty of great referencing tools like EndNote and Mendeley). Sometimes I even take actual paper books out of an actual library, books that have that wonderful old-book-smell which e-readers have yet to provide (a scratch-n-sniff sticker would do!).

So, today when Inger Mewburn, Thesis Whisperer, shared this New Yorker article about our love of physical analog notebooking, and PhD researcher Samuel Dent tweeted advice to first year PhD students to create a thesis template document from Day 1 of the PhD, I have phdcrastinated my way into writing this post. Possibly the most pragmatic and least creative post I’ve written, it takes on the rather unsexy topic of how I’ve been using Microsoft Word to write my PhD thesis.

While not along my normal lyrical lines of thesis as sculpture or research as artistic conversation this post is partly motivated by hearing about PhD students who, shortly before submission, collate their chapters into the final document. This approach is very different to my own as I have written in one document from the start. Here I’ll explain a little about what I’ve been doing and what the effect has been for me.

After my research proposal was accepted, I opened a ‘PhD draft’ document, placed my title on the first page and entered my main headings. At the beginning of the process these were state-the-astonishingly-obvious headings like ‘Introduction’, ‘Literature Review’, ‘Methodology’, ‘Method’, ‘Data’, ‘Findings’ and ‘Conclusion’. Innovation and levels of sub-headings came later as my thinking developed, research threads emerged and the document formed and transformed.

So, my thesis title and my headings have evolved and changed over time. The structure of the thesis remains similar, but now the Table of Contents tells a story and acts as a kind of mini-outline of the structure, ideas and intricacies of the document. The biggest structural changes were in my data section as I grappled with how best to share participant perspectives while preserving their anonymity.

Using Word’s heading styles (and adjusting these to meet APA style specifications) means the Table of Contents changes as my thesis develops; it is easy to automatically update the Contents at the click of a mouse.

The other feature of headings that I use constantly as I write is navigation. I write with the left hand navigation pane open to ‘headings’ and as I need to move around my document, I can scroll and click into where I want to go, jumping around at will. 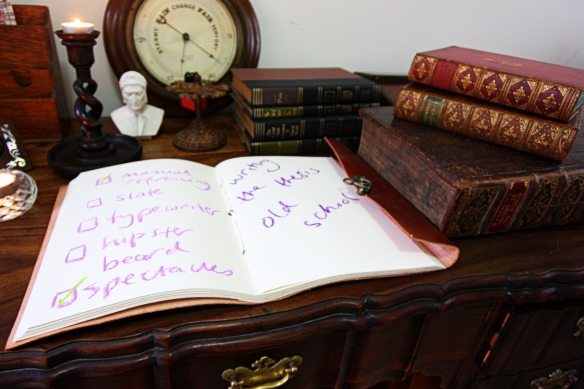 Setting up this shot was as simple as gathering together a few things from home. I really do love old school.

My saving routine is that I save my thesis document as a new file at least once a month or any time before I do some big revisions. This means that I have a record of its growth over time and can dip back into previous documents if I have lost a reference in amongst some cutting and pasting. It also feels like a security blanket for revisions, in case I want to resurrect some deleted writing. Of course, the latter never happens, but it’s a reassurance that softens the psychological blow of deleting large chunks of text.

The nice thing about having this rolling record of thesis development is realising how far I’ve come. I have found that in the PhD it’s very easy to focus on all the things yet to do, all the heights still to scale. From time to time, to combat this looking-forward and focus on what has been accomplished, I open up a draft dated one year ago. It always surprises and delights me to see how far I’ve come. At times the whole structure has shifted, and at other times those chapters that were empty have been filled. I allow myself a moment of basking in the pleasure of realising what I have done, before catapulting myself back into the abyss of what I have yet to do.

When I send chapters or sections to my supervisors I copy the relevant text and paste it into a new document to send to them, so I have these separate documents saved, too.

Another useful feature is ‘Compare documents’ (go to Review -> Compare) which allows me to compare two drafts of the same text and see what has changed in the editing process.

Having my thesis as one evolving document has some practical uses such as checking where in the text I have cited a particular author or used a particular term. It makes it simple to ‘find-replace’ if I have to change a term throughout the text.

More importantly, though, it has facilitated my thinking about the thesis as a holistic story with threads running through it, rather than as a series of disparate chunks. Now that the almost-a-full-draft document sits at 111,000 words including abstract, acknowledgements and references (hopefully to be edited down), I can look back down the long tunnel of drafts and see how my research has grown from its first seed to its almost-full form. 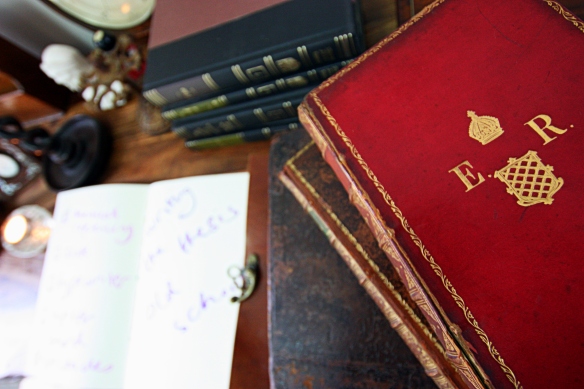