I’ve landed back in Perth after a whirlwind trip to Melbourne for this year’s researchED conference. This post is an attempt to unravel the tangled threads in my head, after what was a big day of thinking, listening and talking. 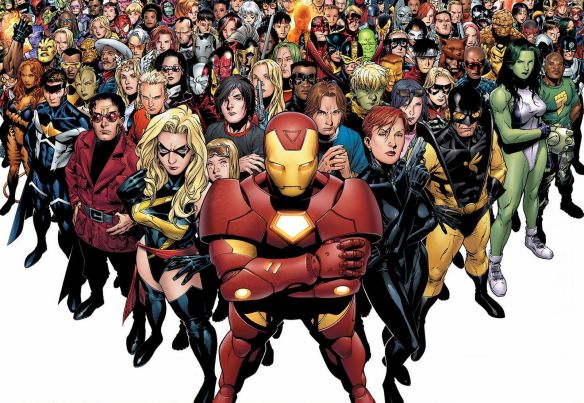 On coaching: Our panel

Being on a panel with Corinne Campbell, Chris Munro and Jon Andrews was the highlight of the day for me. That included not only the panel presentation but the opportunity to be in the same place, at the same time, able to flesh out our ideas about coaching together (as well as plenty of other educational issues).

Founder of researchED, Tom Bennett, saw the four of us working together early in the day and joked that it was like four Avengers coming together in one movie. That struck a chord with me, because we are four individuals deeply committed to making a difference in our own contexts, in four different Australian cities. But we’ve come together across social media time and space to collaborate on #educoachOC, a monthly Twitter chat on coaching in education, which aims to centralise, clarify and tease out the global conversation around coaching in schools. I met Corinne and Chris for the first time at last year’s researchED conference in Sydney, the first Australian iteration. I hadn’t met Jon until yesterday, yet we’ve been collaborating for months, and talking about practice, writing, leadership and coaching.

So getting together with my fellow Avengers was like landing in my nerd heartland for a day. We are, however, less about avenging and more about advocating for supporting teachers and trusting in their capacities for improvement. Coaching was revealed in the panel discussion as an enhancement and growth process, not a deficit model for fixing underperformers.

Our panel seemed well-received, and I learned from my fellow panellists as we covered what we mean by coaching, why each of our schools adopted coaching, what it looks like in each school, the impacts we’ve noticed, and the broader implications for coaching in schools. We explored issues of trust, implementation and mandation. We considered the conference theme: how coaching might fit with ‘working out what works’. On the one hand coaching does not prescribe ‘what works’ to coachees, and yet coaching has been shown to work. It is a researched but contested approach to learning and growth, with coaching models varying in intent and execution. Coaching is about practitioners being given the time and space to work out what works, for them, in their contexts.

On research ethics: My presentation

My individual presentation was on a topic I later described on Twitter as the unsexy undergarments of research: ethics. Necessary and crucial, but often viewed as unexciting. I looked at ethical considerations and decision making, for teachers researching their own schools, using my PhD study as an example.

I shared this quote from Helen Kara’s book Creative research methods in the social sciences:

Ethics should underpin every single step of research, from the first germ of an idea to the last act after dissemination. And ethical problems require ethical decision-making – which allows for creativity.

Here, Helen reminds researchers that ethics is creative problem solving. It does have to be well-considered, systematic, respectful and just (see the Australian National Statement on Ethical Conduct in Human Research), but it doesn’t need to be tedious.

I outlined the ethical challenges in my PhD, and the ways in which I grappled with those and made decisions. My operationalising of ethical solutions included writing information letters and consent forms; using an independent interviewer to interview teacher participants (and a rigorous approach to protecting teacher identities); designing deliberate interview protocols; drawing data together into composite stories; and utilising metaphor to protect participants while making interpretive meaning. 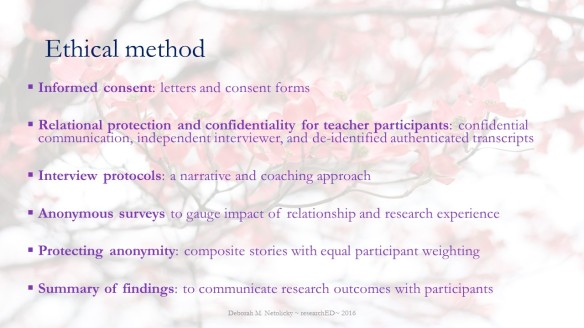 I discussed the benefits and limitations to being a researcher embedded in one’s own context. Below are the implications and questions I ended with. 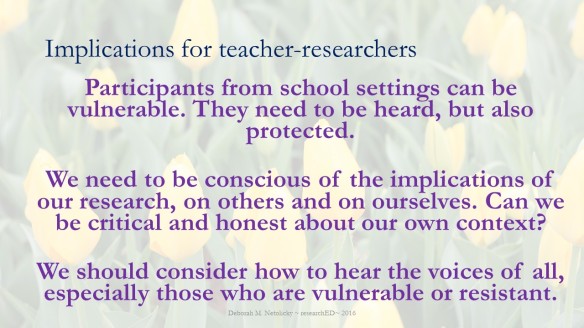 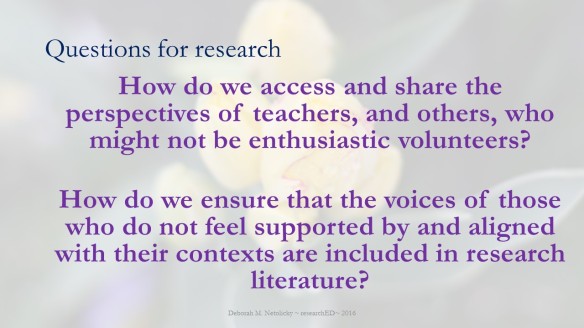 Among other presentations, I saw two on using evidence and research in schools, one by Gary Jones and another by Ray Swann. What I enjoyed about both approaches to evidence-based and research-informed practice in schools, is that they promoted valuing of not only the ‘best available evidence’, but also the wisdom of practice of teachers and school leaders. That is, they valued tacit knowledge and the expertise that comes with lived experience. They also acknowledged the value-laden and culturally-influenced nature of using evidence in schools. I think these are important layers to understanding what works in schools, and how schools can work towards finding what is shown to work in other contexts, and how they might therefore pursue what works in their own.

Thinking back to Tom’s analogy of the Avengers, the crowd at researchED is kind of like a room of fantastical superheroes. Here were close to 200 educators—teachers, school leaders, researchers and professors, each with their own individual gifts, talents, passions, stories and arenas of expertise—spending their Saturday dedicated to learning, connecting and talking about working out what works in education. There were some great questions from the audiences in the sessions I attended. Those that got me thinking included:

“Who decides what the ‘best available evidence’ is and how do they decide?”

“Where should coaching happen and how long should a coaching conversation be?”

“If you were start your research again, would you make the same decisions?”

There were also great comments, questions and provocations from those educators on Twitter who were engaging with the conference hashtag from afar, adding another level of richness to the online and offline conversations.

When Dylan Wiliam popped into the speakers’ dinner, it added a further layer to discussions. Here was another educator coming out to talk education on a Saturday night, after coming straight from presenting at a national conference, and before getting up the next day to present all day again. For me, it was great to be able to discuss his new book, Leadership for Teacher Learning, the use of the Danielson Framework for Teaching, and performance pay.

Tom describes researchED as built on and powered by (I’m paraphrasing and embellishing here) blood, sweat, volunteers and fairy dust. That is, those supporting this conference, around the world—including participants, presenters and schools—care deeply about education. These are people dedicated to making classrooms and schools better places for better learning.

It was a pleasure to be part of the conversation for the second year in a row. I’ve been left with plenty to think about.

And some more reading …

You can see my reasons for attending researchED Melbourne 2016 here.

Jon Andrews has shared his reflections on Melbourne’s researchED here.

Pamela Snow has written this post about her presentation at yesterday’s researchED on justice re-investment.

Greg Ashman wrote this post about his day at researchED.

Susan Bradbeer has written this post about her experience of researchED from afar, as someone who followed the conversation on social media and the blogosphere.

Tom Bennett had some reflections after the Melbourne event, published here on the TES blog.

You can see my reflections on researchED Sydney 2015 here.

Research evidence is essential to the task of improving outcomes for young people, but research will never be able to tell teachers what to do, because the contexts in which teachers work are so variable. What research can do is identify which directions are likely to be the most profitable avenues for teachers to explore. ~ Dylan Wiliam, Leadership for Teacher Learning, 2016 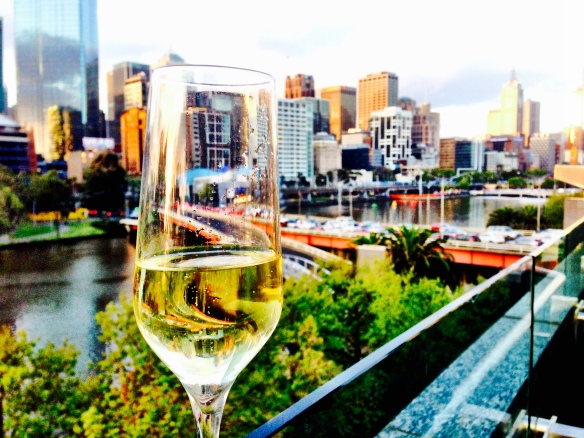 Why would a Western Australian fly to Melbourne for a one day conference? Here’s why researchED is drawing me to the East this May: cognitive conflict and robust discussion around educational matters.

In drawing together academics and education practitioners working in schools, researchED conferences are less about transmission of information and more about provocations and conversations. researchED’s tagline is ‘working out what works’, and those that gather at its events around the globe are interested in working out what works in education, for the benefit of the world’s children. The website tells us researchED’s mission:

researchED is a grass-roots, teacher-led organisation aimed at improving research literacy in the educational communities, dismantling myths in education, getting the best research where it is needed most, and providing a platform for educators, academics, and all other parties to meet and discuss what does and doesn’t work in the great project of raising our children.

Whether individuals come from Australia, Europe or the USA (all locations where researchED events have been held) they share the goal of bridging the gap between research and classroom practice.

As Dylan Wiliam points out, research cannot tell teachers and schools what to do, but it can inform the decisions educators make, and help them follow trails most likely to be beneficial for their students. Tom Bennett, the founder and director of researchED, says that researchED’s mission is to “to make teachers research-literate and pseudo-science proof.” That is, teachers need to be critical consumers, curators and questioners of information and of evidence.

Gary Jones, who is coming from the UK to present at and attend researchED Melbourne, has written an excellent guide to evidence-based decision making in schools. He points out a number of popular ideas in education that are not backed by evidence and reminds educators of the need to be conscientious, judicious and explicit in their use of evidence to make decisions and shape practices.

I’ve made my view clear that teachers can and should be researchers. Taking research into account, enacting practitioner-research practices, and engaging with scholarly literatures, is important in an educational world focused increasingly on accountability, performativity and rapid change. Sometimes, the best thing for a teacher or school to do is to press ‘pause’ and ask some critical questions of the evidence they are accepting or the practices in which they are engaging.

As a teacher and school leader who has recently completed a PhD, I can see the benefits of research thinking to the school environment. It means applying carefully considered and thoughtfully designed methodologies to decision making and innovation. It means trusting in teachers to be a core part of school reforms. Research becomes, not an add-on, but a way of being which is embodied and enacted by educators as they go about their important work.

researchED is part of a global movement to give teachers voice and agency in their work, their schools and their systems, while ensuring that school leadership and classroom practice is informed by research and evidence. Conversation between academics, researchers, leaders, policy makers and teachers can help all involved in education to best serve the students at the heart of our education systems. A wonderful publishing example of this kind of movement is Jelmer Evers and René Kneyber’s book Flip the System, which brings together the voices of teachers, academics and education experts in order to reclaim the space of education discourse for those working as cogs in the neoliberal machine.

So I’ll see you at researchED Melbourne. There will be interesting research and practice shared. There will be classroom perspectives and scholary ones. There will be graceful disagreement. I’m looking forward to presenting among the diverse voices, and learning from them.

(Here is my post on last year’s researchED conference in Sydney, at which I also presented.) 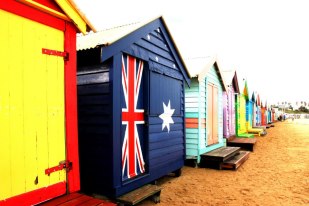